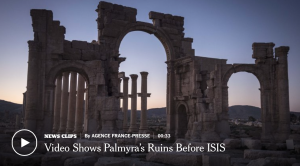 The barbaric attack on human beings with mass killings, public decapitations of innocent people, rape of women and the destruction of millenary cultural sites require a stronger action.

The war intensified and current strategy to ended and stop the barbaric actions seem far from successful.

Today news only adds to the list and deserve a stronger condemnation.